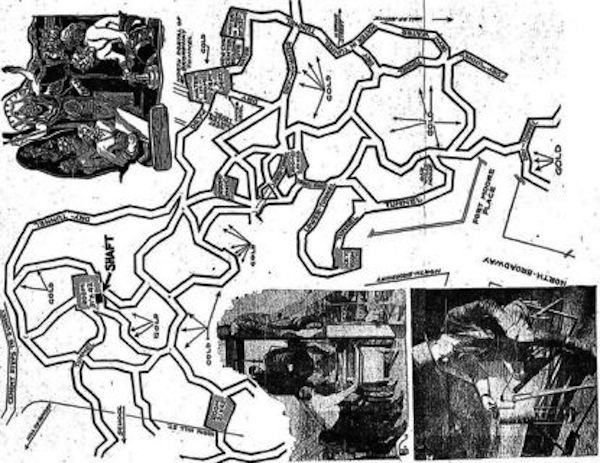 In 1934 an engineer named G. Warren Shufelt claimed to have knowledge of a series of underground tunnels underneath LA. He stated that there were deposits of gold in these tunnels left behind by the “Lizard People.” The stories were actually carried in the LA Times as an actual possibility.
He claimed to have X-ray pictures of the layout of the tunnels as well as some tablets that recorded the history of the human race. Shufelt first heard of the legend of the tunnels from the Hopi Indians.
Quoted From Weird California:
A Hopi chief named Little Green Leaf told Shufelt that the vanished race’s capital city was located under present-day downtown Los Angeles. In 1933, after surveying the area, Shufelt occupied the Banning property at 518 North Hill Street and sank a 350-shaft straight down, digging for what he said was a “treasure room” directly underneath. Shufelt said that he had located gold in the catacombs below with the aid of his “radio X-ray.”
This peculiar instrument, which was sort of a tricked-up dowsing rod, had also helped Shufelt map the location and extent of the underground tunnels. He said that the subterranean city was shaped like a giant lizard, with the head in the vicinity of Chavez Ravine (the present location of Dodger Stadium), and the tail tapering out beneath the Central Library. The “key room,” the chamber that contained the map of the city and the directory to the gold tablets, lay several hundred feet under the present site of Times-Mirror Square. Shufelt also claimed that he’d traced passages stretching to the area around the Southwest Museum, and said that ventilation tunnels extended westward, opening at the Pacific Ocean.
Shufelt actually dug 350 feet before the excavation was halted. Would this have anything to do with the supposed drilling of oil in Los Angeles that goes on today?