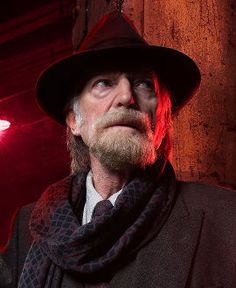 Abraham Setrakian was born in Armenia but raised in Romania. His bubbeh (grandmother) told him stories of the strigoi, or vampires, specifically Jusef Sardu, a Polish nobleman with gigantism who mysteriously became one of the undead during a hunting trip with family. When Abraham was eighteen (during the second World War), his family was driven from their home by the Germans and sent to their Treblinka extermination camp in Poland. Before being captured, after urging her grandson to run from the Nazis, his beloved grandmother commits suicide after Abraham keeps her from turning herself in.
Incarcerated in the Treblinka camp, Setrakian works as a carpenter (since he was trained as one). While awake late at night, Abraham notices a massive and shadowy figure feeding on the sick and elderly. Because the creature uses a massive cane with a wolf’s head like his grandmother told him about Sardu, he quickly deduces that this is the monster his grandmother warned him about. After weeks of planning, the young man makes a silver-bladed knife (as silver is harmful to vampires) and attempts to draw the monster to him by pricking his finger and drawing blood. The powerful strigoi outwits Abraham and after mocking his Jewish religious beliefs, cripples his hands. After the vampire flees from the rising sun to his lair in the woods, Setrakian is found on the floor and taken to be killed. Luckily, the imprisoned people start an uprising and Setrakian manages to escape with the help of his fellow prisoners. The Master’s Lair Setrakian suspected that the Master was hiding in ancient Roman ruins outside of the camp’s forest, which he had heard about from other prisoners. While attempting to avoid searching German officers, Setrakian locates the lair in which he suspects the Master is hiding. Inside the dark ruins, Setrakian locates the vampire’s massive coffin but the monster was not in sight. A now turned German officer named Dieter Zimmer (described as a “true sadist”) attacks Setrakian but the young vampire Hunter manages to kill him with a wooden stake
When the now elderly and vengeful vampire hunter hears about the “dead” airplane landing at New York City’s (where he runs a pawnshop) JFK airport, Setrakian believes this to be the work of the Master. After looking at the autopsies and confirming this to be a vampire outbreak, Setrakian attempts to get CDC officials Ephraim Goodweather and Nora Martinez to help and tells them to destroy the bodies. Initially, they do not believe him and he is arrested for disturbing the peace. While in jail, Setrakian meets a young Mexican thief named Augustin “Gus” Elizalde and his ill friend Felix. After hearing Gus’s story of how Felix got injured and why they are in jail, Abraham tells him that the man they killed was a vampire and that Felix is infected and must be killed. Before they can talk further, Gus and Felix are moved to another facility. Soon Dr. Goodweather and Dr. Martinez come to the jail to speak to Setrakian and free him, since they have now encountered the strigoi for themselves. Since Abraham has disciples and freedom, he takes them to his pawnshop in order to educate them on the strain that they are dealing with. He shows them his vampire-hunting armory within his basement and tells them about the Ancients, the original seven vampires (The Master being one of them).