And now for something completely different: Cthulhu Tract

Posted on February 22, 2017 by Tymothi
OK, for those who do not know what a chick tract is.. allow me to give a brief explanation? Chick tracts are short evangelical gospel tracts (cartoons) created and published by American publisher and religious cartoonist Jack Chick.
Although many of Chick’s tracts express views that are generally accepted within Christian theology, several tracts have expressed controversial viewpoints. Most notably, Chick tracts were known for expressing strongly anti-Catholic views, which are expressed in 20 of his tracts, as well as his criticisms of other religions including Mormonism. As a catholic and somewhat normal person I find that anything that condones or expresses hatred or ignorance towards a group of people that has a different belief system or lifestyle is wrong even in the name of “GOD”. With this said, I came across something I would like to share and these tracts make perfect sense. 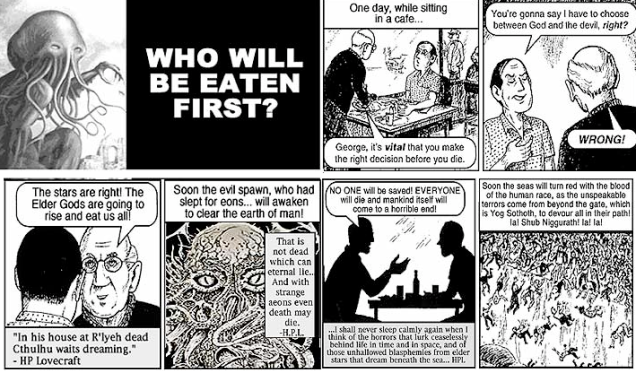 Born and raised on Long Island, lifetime RPG gamer and lover of all things horror. Introduced to H.P.Lovecraft by a family friend in the early 1980s and I haven’t been the same ever since. Married for 22 + years to a beautiful woman and father to a son who every day makes me proud to be his dad. I am also the proud owner of the one and only Blu – a 25+ pound cat with no moral compass to speak of.
View all posts by Tymothi →
This entry was posted in General and tagged General, Humor. Bookmark the permalink.