Conan and the Cthulhu Mythos 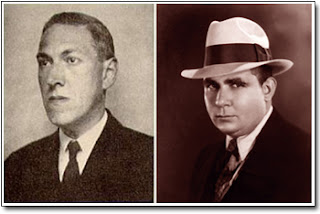 Conan, the black-haired, red-skinned Cimmerian, has become over the last twenty five years a different fellow than the legendary swordsman who walked off the pages of Weird Tales magazine and out of the imagination of Robert E. Howard.  First collections with pastiches by other writers, comic books, then films have changed Conan’s “public image” greatly, making him a veritable house-hold word as it increasing his size, reduced his intelligence and obscured the fantastic back-drop that was a part of all Robert E. Howard’s best works.
The Hyborian Age, that time between the Fall of Atlantis and the rise of the world as we know it, is a vivid setting for the adventures of the Cimmerian who came down from the North to carve out an empire.  But behind the Hyborian Age, as behind the worlds of Howard’s other characters, like Solomon Kane, Bran Mak Morn and King Kull rests a macabre shadow, a world vision that is largely inspired by Howard’s correspondent, fellow contributor to the famous Weird Tales, and friend, H. P. Lovecraft.  The influence that Lovecraft had on the younger Howard was much greater than many recognize.
Recently at a convention I asked L. Sprague de Camp, biographer of both Howard and Lovecraft, if he considered the Conan series to be part of what Derleth called “The Cthulhu Mythos”?.  Mr. de Camp only acknowledged a begrudged family resemble.  Though no one has claimed the Conan stories as part of the Cthulhu Mythos, that group of stories by HPL and his friends centered on Cthulhu and his kin, it does by proxy exist next to them.  One of the King Kull stories, “The Shadow Kingdom” (Weird Tales, August 1929) is a Mythos tale.  Kull lived in the age before Conan, thus, they exist in the same world, though at different times.  But this isn’t enough to place the Hyborian Age into the frame-work of the Mythos.  Howard did write at least six undisputed Cthulhu Mythos stories, “The Worms of the Earth” and “The Black Stone” being two of the best.  These tales name the beings of Lovecraft’s world, tell of new books and monsters, but none  feature the beloved Cimmerian.
Howard’s concept of the supernatural in his fiction can be best summed up by this dialogue taken from “Shadows in the Moonlight” (Weird Tales, April 1934):  “‘What gods?’ he muttered./‘The nameless, forgotten ones.  Who knows?  They have gone back into the still waters of the lakes, the quiet hearts of the hills, the gulfs beyond the stars.  Gods are no more stable than men.’”
Here we can see Howard has created a world that was once inhabited by wondrous and terrible creatures but most have fled, leaving only a few remote survivors, much as Lovecraft (or August Derleth) wrote: “All my stories … are based on the fundamental lore or legend that this world was inhabited at one time by another race who, in practicing black magic, lost their foothold and were expelled, yet live on outside ever ready to take possession of this earth again.”  Unlike HPL’s protagonists, Howard’s humans do not quail and go mad, but hurl steel and muscle against the unsettling forces of the supernatural — and one of the mightiest of these combatants is Conan. This key difference is the point of divergence for these two masters of weird fiction.
In the de Camp edited tale “The Vale of Lost Women” (Magazine of Horror, Spring 1967) Conan shows us this underlying difference as he tells of the minions of the Dark: 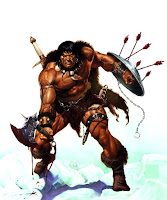 Born and raised on Long Island, lifetime RPG gamer and lover of all things horror. Introduced to H.P.Lovecraft by a family friend in the early 1980s and I haven’t been the same ever since. Married for 22 + years to a beautiful woman and father to a son who every day makes me proud to be his dad. I am also the proud owner of the one and only Blu – a 25+ pound cat with no moral compass to speak of.
View all posts by Tymothi →
This entry was posted in Fiction, General, Lovecraft Circle, Lovecraftian and tagged Conan, Robert E howard. Bookmark the permalink.