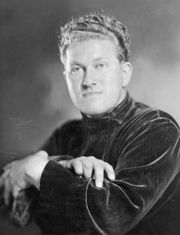 . Though best remembered as Howard Phillips Lovecraft’s literary executor and for his own contributions to the Cthulhu Mythos genre of horror, Derleth was a prolific writer in several genres, including historical fiction and detective fiction.

The son of William Julius Derleth and his wife Rose Louise Volk, he grew up in Sauk City, Wisconsin. At the age of 16, he sold his first story to Weird Tales magazine. Derleth wrote all throughout his four years at the University of Wisconsin-Madison and received a B.A. in 1930. During this time he served briefly as editor of Mystic Magazine.
In the mid-1930s he organised a Ranger’s Club for young people, served as clerk and president of the local Board of Education, served as a parole officer, organised a local Men’s Club and a Parent-Teacher Association. He also lectured in American Regional Literature at the University of Wisconsin.
In 1941 he became literary editor of The Capital Times newspaper in Madison, a post he held until his resignation in 1960.
Derleth was married April 6 1953 to Sandra Evelyn Winters; they were divorced six years later in 1959. He retained custody of their two children, April Rose and Walden William. In 1960, Derleth began editing and publishing a magazine called Hawk and Whippoorwill, dedicated to poems of man and nature.
He died on July 4, 1971 and is buried in St. Aloysius Cemetery in Sauk City.