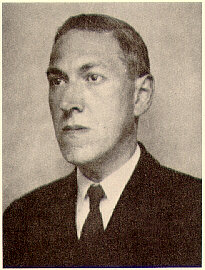 Comparisons between Edgar Allan Poe and Howard Phillips Lovecraft are, I suppose, inevitable; seemingly, in recent years [writing in 1973] they are also interminable.
I shall not, therefore, repeat the usual recital of similarities to be found within their work — there will be no mention of black cats, revenants, or Antarctic settings per se.
But at the same time I have no intention of making a calculated bid for attention by deliberately asserting, as some have also declared, that no real resemblance exists aside from superficial employment of stock characters and themes common to virtually all stories in the genre.
To me, this is an untenable statement: Lovecraft, like every writer of fantasy and horror fiction subsequent to Poe, was necessarily influenced by the work of his predecessor — and to certain extent his work needs must be derivative in some slight sense. Actually, Lovecraft’s homage to Poe in his essay Supernatural Horror In Literature, indicates a degree of appreciation and admiration which leaves no doubt as to the profound impression made upon him by the earlier master.
But to me the most fruitful area of comparison lies within an examination of the backgrounds and personalities of the writers themselves.

Consider the facts. Both Poe and Lovecraft were New England born. Both were, to all intents and purposes, fatherless at an early age. Both developed a lifelong affinity for poetry and the elements of a classical education Both utilized archaisms in their writing styles and affected personal eccentricities which in time became consciously cultivated.
Although Poe spent a part of his youth in England and travelled along the Atlantic seaboard in later life — and while Lovecraft ventured up into Canada and down into Florida on vacations a few years prior to his death — neither man ever ventured west of the Alleghenies. Lovecraft, on one occasion, did skirt them to visit E. Hoffman Price briefly in his New Orleans home, but essentially he and Poe were Easterners. Their outlook was, to a marked degree, provincial; even parochial.
Both men distrusted “foreigners” in the mass: both retained a profound admiration for the English. These attitudes are plainly evident in their work, which is many particulars removed and remote form the main current of American life.
A reader attempting to capture some glimpse of the United States in the 1830-1850 period would gain small enlightenment from the poetry and fiction of Poe. At a time when the entire nation was engaged in a westward thrust, beginning with the peregrinations of the mountain men and ending with the Gold Rush in the year of Poe’s death, one searches in vain for a wet which does not seemingly even exist in his literary compass.
Byronic heroes sequestered in British and continental locales scarcely reflect the American attitudes or aptitudes in the era of Old Hickory, Davy Crockett, the fall of the Alamo, the Mexican War and the growing turmoil over slavery.
Nor would a reader find more typically American protagonists amongst the pendants, professors and regionally-oriented recluses of Lovecraft’s tales, in which there’s scarcely a hint of the manners and mores of the Roaring Twenties or the Great Depression which followed in the ensuing decade. Aside from a few remarks regarding the influx of immigrants and concomitant destruction of old folkways and landmarks, plus brief mentions of the (intellectually) “wild” college set, Lovecraft ignores the post WW1 Jazz Age in its entirety: Coolidge, Hoover, FDR, Lindbergh, Babe Ruth, Al Capone, Valentino, Mencken and the prototypes of Babbit have no existence in HPL’s realm. It is difficult to believe that Howard Phillips Lovecraft was a literary contemporary of Ernest Hemingway.
And yet a further comparison between Lovecraft and Poe remains; one of profound importance in any consideration of their work, because it softens any charge that two writers were totally unaware of the actual world and unrealistic in their treatment of their times.
I refer, of course, to their mutual interest in science. Both Poe and Lovecraft were acute observers of the scientific and pseudo-scientific developments of their respective days, and both men utilized thee latest theories and discoveries in their writing. It is only necessary to cite Poe’s use of mesmerism, his employment of the balloon hoax, his detailing of data in the Arthur Gordon Pym novella, to prove the point.
Lovecraft, for his part, relies on scientific background material in his Pym-like At the Mountains of Madness, “The Shadow Out of Time” and other efforts; notable is his immediate adoption of the newly discovered “ninth planet” in “The Whisperer in Darkness.”
Lovecraft’s interest in astronomy undoubtedly led to his increasing interest in other fields of scientific endeavor, just as Poe’s early experiences at West Point must have fostered his preoccupation with codes an ciphers. And both men, as professional writers, were well and widely-read in the contemporary work of their day: Poe as a working critic, demonstrates his knowledge in his nonfictional efforts and Lovecraft, in his correspondence, proves himself no stranger to Proust, Joyce, Spengler and Freud.
But the point is that Poe and Lovecraft deliberately chose to turn their backs on contemporary styles and subject-matter and created their own individual worlds of fantasy. In this above all else they were similar.
And in this, above all else, we readers of Poe and Lovecraft are fortunate indeed. We shall never know, and never care, what Edgar Allan Poe though of Andy Jackson’s “kitchen cabinet” or how H. P. Lovecraft regarded the Teapot Dome scandal. Small loss, when both have given us glimpses of worlds peculiarly and provocatively their very own.
For the final similarity is this — Poe and Lovecraft are our two American geniuses of fantasy, comparable each to the other, but incomparably superior to all the rest who follow in their wake.