Spotlight : Nodens, the Lord of the Great Abyss 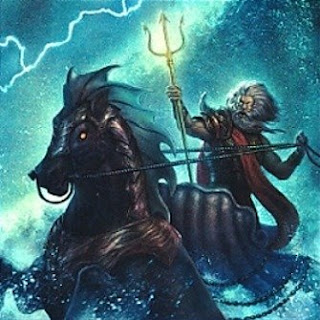 And upon dolphins’ backs was balanced a vast crenelated shell wherein rode the grey and awful form of primal Nodens, Lord of the Great Abyss… Then hoary Nodens reached forth a wizened hand and helped Olney and his host into the vast shell.
—H. P. Lovecraft, “The Strange High House in the Mist”
Nodens is one of the Elder Gods and appears as an elderly, human male with white hair—gray-bearded and hoary yet still vital and strong. He often rides in a chariot formed from a huge seashell pulled by some great beasts of legend. Nodens is served by the Nightgaunts.
As a hunter, he will chase down evil creatures in the Dreamlands, such as the Shantaks. He prefers to hunt the servants of the Great Old Ones or Nyarlathotep because they are usually the most intelligent and offer the best sport, but not necessarily because he wants to help humans being attacked by them. He has, however, been known to deliberately help humans, such as when he offers advice to assist Randolph Carter against Nyarlathotep in The Dream Quest of Unknown Kadath: “Out of the void S’ngac the violet gas had pointed the way, and archaic Nodens was bellowing his guidance from unhinted deeps,” later followed by “And hoary Nodens raised a howl of triumph when Nyarlathotep, close on his quarry, stopped baffled by a glare that seared his formless hunting-horrors to grey dust.”
Lovecraft may have based Nodens on Arthur Machen’s The Great God Pan (1890) because Machen was one of Lovecraft’s favorite authors. In the novel, Machen describes a late Roman inscription hinting that Nodens is actually the titular god Pan.
Noteworthy Appearances:

Born and raised on Long Island, lifetime RPG gamer and lover of all things horror. Introduced to H.P.Lovecraft by a family friend in the early 1980s and I haven’t been the same ever since. Married for 22 + years to a beautiful woman and father to a son who every day makes me proud to be his dad. I am also the proud owner of the one and only Blu – a 25+ pound cat with no moral compass to speak of.
View all posts by Tymothi →
This entry was posted in Call of Cthulhu, Elder Gods, General and tagged Elder God. Bookmark the permalink.